Google is desperate to get people using Google+. They covet that priceless metadata that right now only Facebook has, called the “Facebook Like.” Many of the end-of-year bonuses now at Google are directly tied to how much Google+ product you can push on the mostly unwilling crowds of internet users.

The latest of hundreds of attempts to get real people using Google+ is present in the brand new Adsense scorecard, which made its debut right around Adsense’s 10 year anniversary this past week. 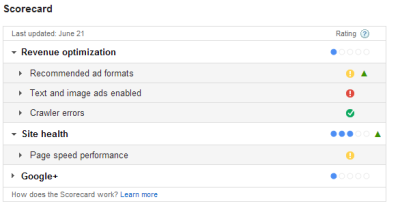 It’s actually slightly useful – lets you know opportunities you’ve missed and what you can do better. I’ve already made a couple of changes based on the scorecard, and will probably installing a site caching plugin to address page speed performance as well. Of course right there at the end, they stick “Add a Google+ Button” – as if that’s going to actually help with earnings from Adsense?

I’m sick to tears of Google+ already, and I don’t even use the program.